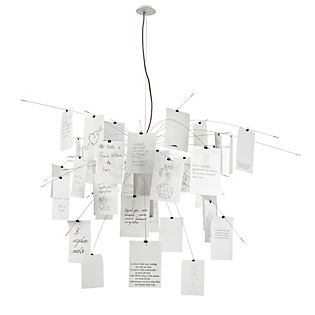 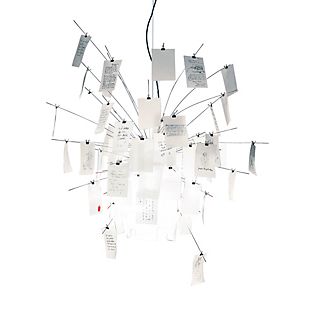 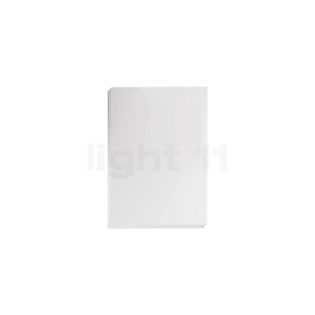 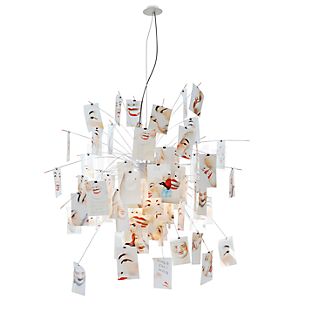 Certainly one of the most famous German designers is

Ingo Maurer, who has regularly received applause with his fanciful works from design enthusiasts in the whole world since 1966. So the Ingo Maurer Zettel'z belongs to the one of the most acclaimed lighting concepts in the work of the Munich designer.

At first sight, the pendant light Ingo Maurer Zettel‘z 5 leaves you rubbing your eyes. The unusual lamp wears a very special “dress”: 31 DIN A5 sheets of ingeniously printed Japan paper, artfully arranged around light source, which is covered by a satined glass cylinder, and additional 49 sheets of Japan paper, this times plain, give the Ingo Maurer Zettel pendant light its distinctive look. So you can give free rein to your thoughts and phantasy and write or paint whatever you want. Afterwards, your living room will shine in brightness like no other one. The

Zettel'z 5 is one of the best sellers of the light11 assortment. Its body is made of stainless steel and heat resistant, stained glass that acts as a diffuser. The Ingo Maurer Zettel'z pendant light is delivered including two halogen lamps. The upper one provides pleasantly diffused general lighting, whereas the lower one supplies direct, zoned light with a beam angle of 30° – ideal for the illumination of a dining table in the kitchen.

Equal in its visual impact, the somewhat smaller Ingo Maurer Zettel´z 6 presents itself as a real eye catcher as well. The

pendant light offers 40 sheet of printed and 40 sheets of unprinted DIN A6 format Japan paper. Due to its unusual design, this interesting design object lends living and dining room added value in a never seen before way and submerges dining and coffee tables in atmospheric zone lighting. Thanks to a second illuminant, the Zettel’z 6 has enough luminous intensity to act as a general lighting as well.

The Bang Boom! Zettel'z, a limited special edition by Ingo Maurer, is unrivalled in terms of extravaganza in this collection. This exciting pendant light not just equips spaces like dining, living and bedroom with imaginative lighting, but provides an often dull home office with an extra dose of pep. This striking fixture, decorated with 80 sheets of handmade DIN A5 Japan paper, boasts cartoon images or words in cartoon style. You just have to fulfill the playful task to arrange the slips according your liking. Two integrated halogen lamps provide warm, white general lighting and accented zone illumination.

Additional information about the designer: Lamps by Ingo Maurer fascinate through their unusual, surprising design. Combined with craftsmanship and technical know-how, they reflect the innovative spirit of time. Ingo Maurer was born on the island of Reichenau on Lake Constance in 1932. After his training as a typograph, he studied graphic design in Munich. 1960 he emigrated to the USA and worked there until 1963 as a freelance designer. 1966 he founded Design M in Munich. There he created one of his first prize-winning lamps – Bulb. Many more awards followed, among others, Designpreis der Stadt München (1999), Lucky Strike Designer Award (2000), „Collab`s Design Excellence Award” of the Philadelphia Museum of Art (2002). His creational work was crowned, when he received the honorary doctorate from the Royal College of Art in London. Besides, Ingo Maurer won the design price of the Federal Republic of Germany for his life's work.
Back to top